As we arrived at Gorleston it was easy to think summer had arrived, unbroken blue skies and a pleasant breeze. However, being from the North the wind still had a chill in it and the beach was just about devoid of beach ‘dwellers’.
Twelve boats took to the water ranging from a Laser to the ‘Cats’. 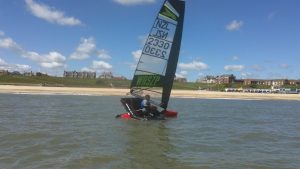 We were also joined by Sam, visiting the club and sailing his Waszp, unfortunately for him the wind did not quite pick up sufficiently for him to enjoy the Waszps incredible performance.

Race 1 started just after low water with negligible tide. Chris Sallis (D-One) nailed the start and led for a short while until David Brief (Shadow X) powered his through the fleet to lead by over a minute after lap one. Behind Chris there was a three way battle between the D-Ones of Steve Gray and Nick Favell and the 400 of Dave Houghton and Tamsin Highfield. The race team finished the race after two laps as a couple of boats have lingered a bit too long on the beach and missed the start. David managed to complete three laps almost lapping some of the fleet. Chris led the rest over the line followed by Dave & Tamsin. 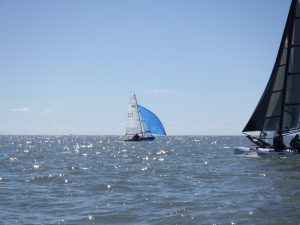 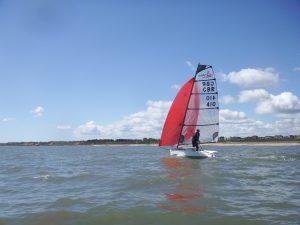 The flood tide had now picked up so upwind most of the fleet ventured towards the shore during race 2. Dave & Tamsin appeared off the line with a short lead over Chris and Steve and after lap one were over a minute ahead of the rest of the fleet which they held to the finish with the Cats now suffering in the lighter winds. We were also joined by a water spectator in the form of a seal who took much interest in watching the racing !

With the wind easing the race team took the sensible decision to reduce the size of the course. The three D-one’s, led by Chris judged the tide best rounding the windward mark ahead of the fleet. After four laps Dave & Tamsin managed to sneak through and crossed the line just ahead of Chris, with Steve just six seconds behind.
Many thanks to the race team for arranging such a lovely day, Richard did say it’s always nice when he does OOD, so perhaps he ought to do it every week !