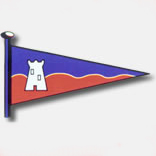 A quick summary of todays sailing down at ‘the beach’
With many regulars away it was a somewhat depleted fleet that left the shore. With a warm F3-4 from the SW and a flood tide it had the makings of a good days sailing. Crewless Tom C was so desperate to sail he was seen in one of the club Lasers !

Race one got underway with the entire fleet very line shy ! Most stayed offshore maximising the tide and despite a late start David B sailing his Shadow was first at the windward mark closely followed by Phil A in his Contender. Without mentioning any names there was some very strange tactics by some at the leeward gate with one boat rounding neither the mark or the committee boat and another rounding the mark the wrong way despite following close behind others who had rounded correctly ! Phil and Lorna in their 400 were going well until their ‘wing wang’ broke making downwind legs very slow. On corrected time David B just beat Phil A with Phil and Lorna managing to hold on to third place.

By the time race two got underway the wind had increased to F4-5 with some decent waves to make the downwind legs interesting! Team Nick sailing their 59ER almost pulled off a port hand flyer but were slightly late to the line resulting in them having to duck a couple of boats. Unsurprisingly the two Cats were first to the windward mark. David B rounding just ahead of David and Steve in their Hobie Tiger. There were a few capsizes in the dinghy fleet but Phil A managed to keep the mast vertical and led the dinghies home. On corrected time Phil managed to separate the two cats on corrected time with David B getting his second bullet.

With the wind strengthening and the sea getting ‘bigger’ it was decided to call it a day and head back to shore. Thanks to Andy and Christine in the rescue boat who were kept busy.

Congratulations to the GYGSC D-One fleet who attended their Nationals at Torquay this weekend. Chris finishing 2nd, Martin 5th and Ben 9th 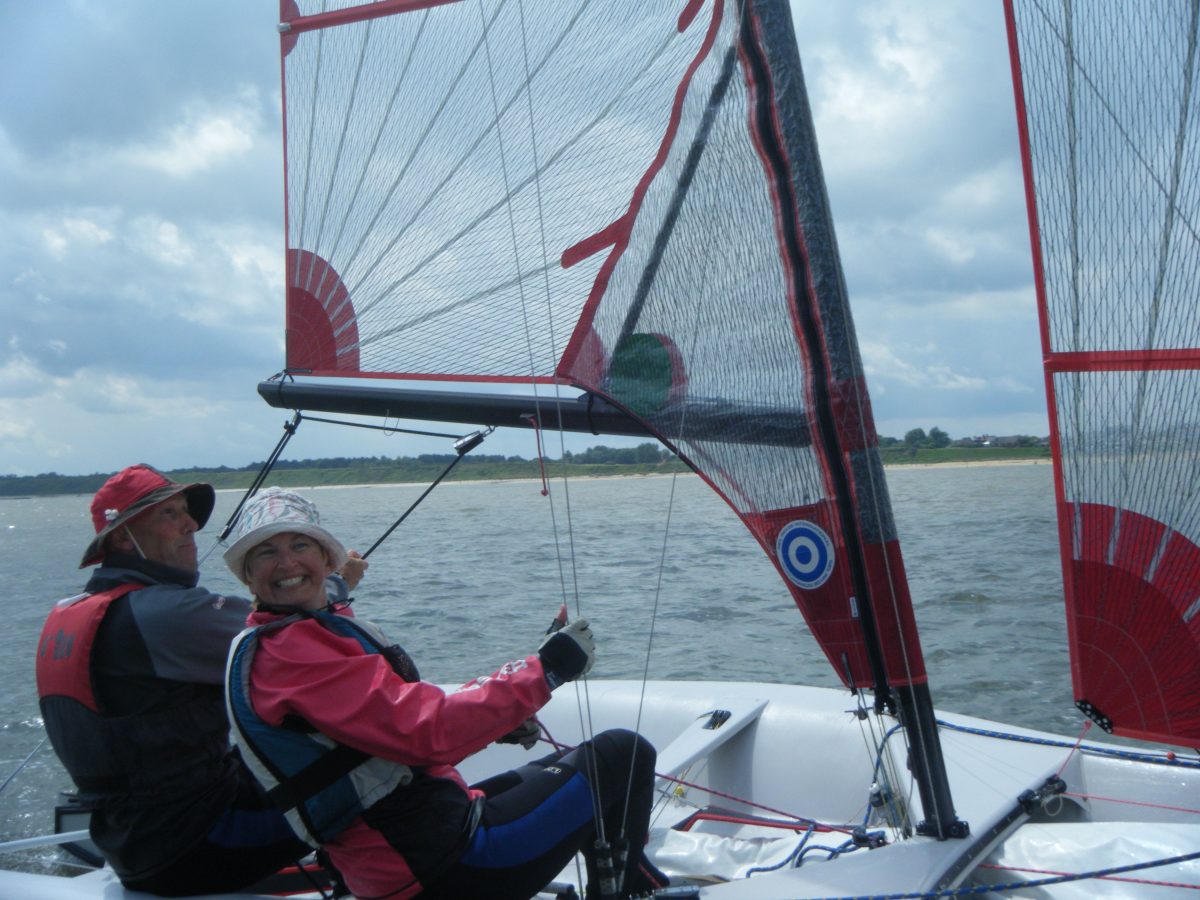 Congratulations to Martin Browne and John Sadington for winning the D-One open and Beach Regatta.

A big thanks to all our Guests and to Angie who fed us all with a splendid meal on Saturday evening. 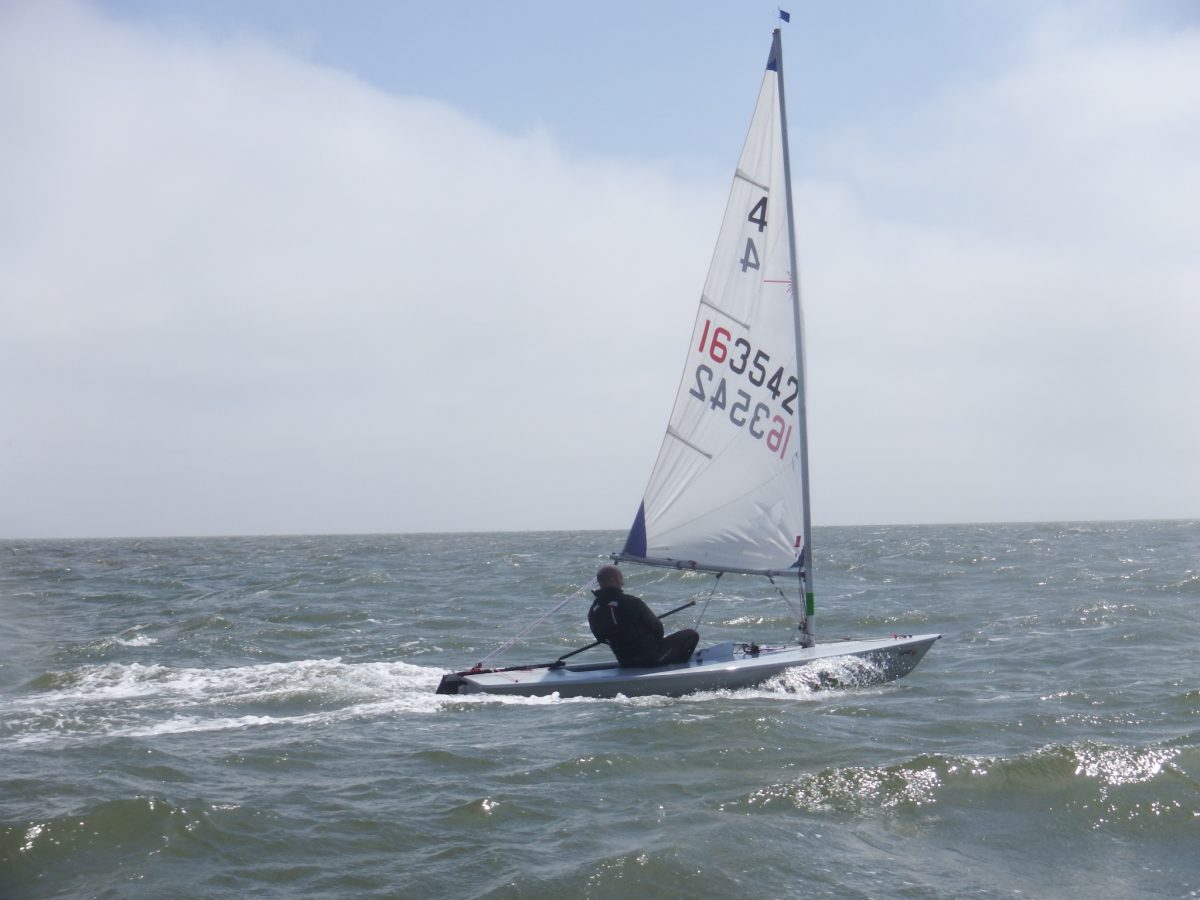 Congratulations to Dave Houghton and John Symonds for winning the Spring Series.

Congratulations also go Richard Smith in his Laser Radial for taking wins in both races in the first races of the summer series. 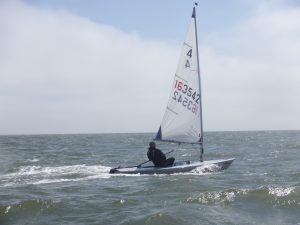 The fleet arrived at Gorleston with many expecting no racing but with a flat sea the launching looked good despite the strong winds. . A number decided it was very windy and did not launch.  8 boats headed out Tom and Will both with new crew.  In the end 6 boats came to the start. 4 400’s a 500 and 420.  The fleet opted to start on port with Fryer and Houghton  getting the better starts. At the windward mark,  Fryer headed inland and Houghton out to sea, Houghton tipping it in on the gybe saw Freeman in the Rs500 take advantage, rounding the next mark in second place closely followed by Houghton after a speedy recovery.  At the end of the 3rd lap Fryer was just ahead of the R500.

The second Race saw the 2 D-ones of Sallis and Gray join the fleet just as the wind picked up a notch!!  The 500 got away but with some spinnaker problems and the team of Freeman and Sykes still working a few things out only just managed to beat Houghton to the line with Fryer 1 minute of so behind.

Just before the third race start Harlow decided to lose Lorna over the side, to be picked up by Brown and returned to Harlow by the rescue boat.  This meant only 4 boats started and Brown was late to the party after his taxi work.  This time the 2 lap race saw Freeman and Sykes get clear away having worked out how to sail together, finishing 2 minutes clear of Fryer with Houghton 30 seconds back. 3 Great races with Freeman taking all 3 wins despite complaining he couldn’t see where he was going down wind due to the spray.  Thanks to the OOD team for an exhilarating days sailing. 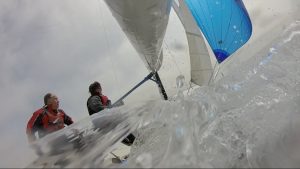 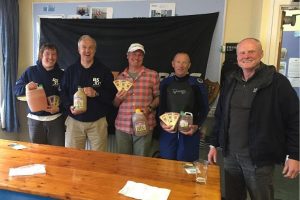 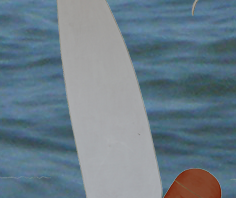 The first saw the 2 R300’s round first followed by Phil and Lorna in the 400 with Keith and Richard neck and neck in the 2 lasers, with Keith and Richard changing places throughout the race.  At the end on the third lap the everything was very close.  With Dave taking the honours by 2 seconds on corrected time from Richard Brown with Keith only 5 seconds behind him.

The second race saw the 2 300’s get way with Dave edging away from Richard Fryer and Phil and Lorna, in the lasers Keith managed to break away leaving Ed and Richard to battle for 4th,  Dave again took the win this time Fryer taking 2nd and Keith 3rd,  Brown just overhauling Ed on the last leg to take 4th.

Many thank to Nick Eastwood for running the races.

With a forecast of a changeable wind direction and a strong tide, the boats gathered on the prom to await a settled breeze. A few sailors decided to head home, then the wind appeared to arrive from the south east and after a quick change the fleet headed out.  The first race got away at 11:30 and all was looking good for the first lap as the lead boats headed back down wind, on the second lap the wind swung further to the east,  with spinnakers dropped Chris Sallis held off the following 400’s of Brown and Houghton for the first victory of the day.  With the course reset and the first signal sounded the wind veered to the north east  the consensus was to start the race anyway.  With Kites hoisted as soon as boats cleared the line the boats reached for the mark, Houghton, James (without kite) and Gray rounded first and headed back, The less than conventional course and only 2 ten minute laps saw Dave Houghton hold off Steve Gray to take the honours.   The wind now directly from the East and the course reset (not far enough into the tide) and the repaired Hobbie of the 2 Steves joined the fleet for the third race.  The 700 and Hobbie cleared the fleet but not each other to round together at the end on the first lap, Sallis and Houghton in 3rd and 4th.  The now shorter than normal course meant it was 4 laps for the Hobbie and 700 never too far apart but Sallis took the honours from Highfield in the 700 and Houghton in 3rd.  The later start and course changes meant we called it a day and headed in for a late lunch.

Another bright sunny day and pleasant breeze greeted the fleet for the first weekend of the Watling Plate.  Dave and Jon in there 400 port tacked the fleet and pulled out a good lead up the first beat.  Behind the 400 Ben and Steve in their D-ones had pulled away from the fleet to hold second and third.  With a slight drop in the breeze the rest of the fleet grouped up as boats struggled to judge the tide.
Dave and Jon continued to pull away and were looking good till a miss timed gybe at the gate resulted in a near miss with the committee boat and a first swim of the season.  Ben took full advantage and in the building wind and waves took the lead and never looked back to take the win with the 400 recovering to take second.  Anna and Keith having got there capsize out of the way before the start took a well deserved 3rd.   With the wind and waves continuing to increase and with everyone bar Jamie Freeman in a borrowed RS700 and Ben having taken a swim the fleet headed for the beach and a pie.
Results Here……….
Next week is the start of the spring series, so if you haven’t made it down yet come and join in the fun!
Regards
Phil

At last the season started today at Gorleston, with the aptly named ‘Start of season’ trophy.  Conditions could not have been better with sunshine all day and a F2 wind to start with but increasing throughout the day.  With the assistance of a flooding tide upwind legs were relatively short meaning plenty of time to enjoy the downwind legs. The D-One’s were out in force with Chris kicking of the season with a perfect score.  Dave H.

Get updates by email

Paddle Board Next Door