The second Thursday evening session got underway with a pleasant F3-4 breeze.

Race 1- With the tide still flooding Keith (Laser) and Ed (Contender) went inshore to get out of the tide but Richard (Solution) decided to go out to sea hoping for a better wind. Keith was first round the windward mark followed by Richard then Ed, all very close. After the second lap it was still close and the order remaining unchanged with only 5 seconds between them. After the third lap only one second between all 3 boats. On the fourth and final lap Richard had opened up a small lead followed by Ed then Keith..
As race two was about to start Richard’s goose neck broke so the race team towed him in. Ed and Keith decided to go for a ‘jolly’ as the conditions were so good and the forecasted rain had yet to arrive, although it did as the boats were back on the beach. Thanks to the race team of Phil and Little Ed. 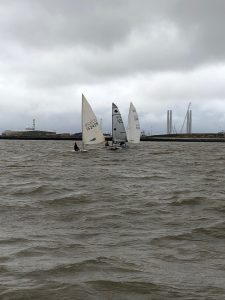