On arrival Gorleston was bathed in sunshine with a nice warm F2-3 breeze. During the racing this was interrupted by the occasional cloud and even a short light rain period, but that brought the bonus of a most vivid rainbow. 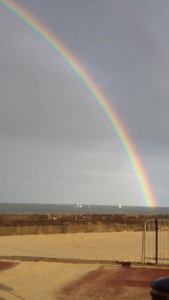 The pot of gold in the case is the sailing at Gorleston.
Race one, still some ebb tide flowing, with a reasonably consistent F2-3 from the West.
Dave & Clive (400) led at the start followed by Phil (700), these two had a good lead after the first lap. Phil took the lead on the final run followed by Dave & Clive and Ed sailing his Contender. On corrected time Richard (Solution) took the honours
Race two – Keith (Laser) nailed the start and led for a long way up the beat. The second half of the beat saw several wind shifts as the wind gradually shifted to the SW. Dave & Clive lead after lap one closely followed by Phil and Ed, with the remaining boats closely packed. By the third lap the tide had turned and now flooding and combined the wind shifting to the SW the final lap was drag race. Dave & Clive and Phil by this time building a good lead over the fleet, with the former claiming the win.
The ‘Race Team’ kindly moved the start line for the final race to compensate for the new wind and tide conditions. The wind by now had dropped to a F1. The whole fleet remained tightly packed throughout the race, bunching at the windward mark and all the way to the line as thankfully we only did one lap. Phil managed to break free to cross the line a few minutes ahead. At one point Dave & Clive looked like they might be beaten over the line by Richard and Keith but managed to hang onto their slender lead over the water. Richard took the race on corrected time by just 10 seconds followed by Keith.
Overall, Richard came out on top with two wins. Many thanks to the ‘Race Team’, aka Richard Fryer for providing a pleasant evening sailing