Conditions could hardly have been better for competitors as they arrived at Gorleston on Saturday for the annual GYGSC Beach Regatta. Cloudless skies and a warm SE’erly F3. It was nice to see many visitors from local clubs attending who were to prove more than a match for the locals!
At the start of race one the wind had dropped a little and there was the last of the flood tide flowing to assist the upwind legs. The start line was keenly fought with one boat being called back. The fleet spilt with those opting to go right appearing to benefit most. Unsurprisingly it was David Brief sailing the fastest boat on the water, a Shadow-X leading at the windward mark and going on to finish well ahead of the next boat, Chris Haslam in a RS600. However Phil & Dennis Manning, sailing a Wayfarer were finding some good upwind pace to win on corrected time by over a minute and a half. The OK’s of Ben Falat and Rodney Tidd enjoyed the first of three close battles with Ben staying ahead throughout the race to take second. 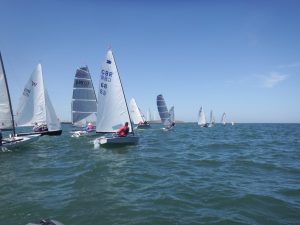 The wind had increased slightly and the tide negligible at the start of race two. The RS600 of Haslam led from start to finish crossing the line some way ahead of the next boat. However he was relegated to second spot by the Wayfarer of Team Manning who once again won by a clear margin, this time by over a minute on corrected time. The battle at the OK corral this time was won by Tidd who maintained a comfortable lead over Falat.
For race three the wind had increased a little more and the tide now ebbing with most of the fleet opting to stay inshore on the beat. Chris once again led the fleet closely followed by Dave Houghton & John Symonds in a RS400 and Steve Gray in a D-One. These three built up a good lead on the fleet to finish well ahead. The OK’s continued their battle with Tidd just a few seconds ahead until the final run when Falat managed to squeeze pass, crossing the line just seconds, ahead but relegated to second place by the consistent Team Manning, this time wining by over two minutes.
Once back at the clubhouse it was drinks and a Fish & Chip supper outside the clubhouse.

Sundays forecasted wind was a little late arriving as at the start of race four it was only a F2 from the NE. The key factor was to find a clear channel on the long tack along the coast. With a strong ebb tide most of the fleet opted to stay inshore as long as possible before heading out into the stronger tide and the windward mark. The early leaders did this too early resulting in a long tack offshore to the mark. Richard Brown & Robyn Ollington (RS400) timed it to perfection and rounded the mark with a small lead over the next pack of four boats led by Phil Highfield (RS700). Richard & Robyn held the lead for the first two laps only losing a place to the faster Spitfire sailed by Joe Crabbe on the final lap. Behind team Manning continued their good form taking the race by nearly four minutes on corrected time and Richard & Robyn second. 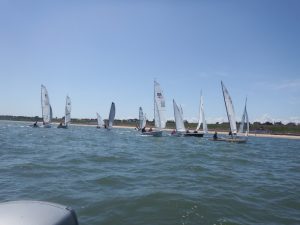 The wind picked up a little for race two shifting to the East which resulted in a quick course change for the race team. Joe (Spitfire) led the fleet round the windward mark closely followed by Chris (RS600). Close behind was a tightly packed group of three boats headed by Dave & John (RS400). Further back Commodore Phil Harlow with guest crew Keith Sykes (RS400) were having a close battle with Phil Allison (Contender). Just a few seconds separated these two for the first to laps although Phil & Keith managed to open a gap on the final lap. Line honours went to Joe (Spitfire) by quite a margin although it was Team Manning who once again took the win on corrected time with Chris(RS600) second.
The wind was a F3 for the final race. Joe (Spitfire) did a horizon job on the fleet completing four laps whereas some only did two. Phil (RS700) and Chris (RS600) headed the chasing pack with Phil pulling ahead on the second lap. The RS400’s of Richard & Robyn and Dave & John enjoyed probably the closest racing of the weekend with just a few seconds between them as they rounded the windward and leeward marks. With positions changing on every leg it could have gone either way but Richard & Robyn’s upwind speed proved the deciding factor and came through to cross the line just ahead. Team Manning were not resting on their laurels and once again winning on corrected time by three minutes with Chris (RS600) second and Joe (Spitfire) a creditable third considering the light conditions not ideal for the catamarans. 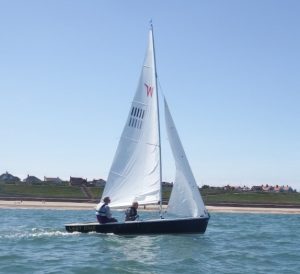 No surprise to the overall winners of the event Phil & Dennis Manning showing great all round boat speed. Chris Haslam (RS600) recorded a consistent set of podium positions to claim second. (so the flight from Oz was worth it then Phil !)
Thanks to all the visitors who attended and making the event so enjoyable and the race teams for providing us with two days of great sailing.