There were five classes of dinghy represented on Thursday evening, RS400, D-One, Contender, RS300 & Laser. With low water at around the start of racing the ebb tide was easing which was just as well as the warm Southerly F3 wind eventually turned to the SE and decreasing to a F1 by the end of race two.
Race one – Dave (RS300) and Adrian (D-One) led at the windward mark. After one lap Dave led Ed (Contender) and Phil & Lorna (RS400). A shift in the wind to the SE on the next lap resulted in Dave the biggest benefactor ending the ‘beat’ on a fetch to the mark and taking the race win. Phil & Lorna eased past Ed on the second lap with Keith (Laser) staying in contention to take second on corrected time and Ed pipping Phil & Lorna to third 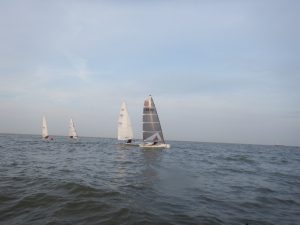 With the wind now from the SE the race team moved the windward mark for race two. Dave tried a port end flyer only to have the duck most of the fleet. However, a couple of boats had a somewhat hampered start as they snagged the warp on the start line mark. Dave led after lap one with Phil & Lorna a few seconds ahead of Adrian. The wind now dropped to about F1. Despite the decreased wind the tide was now negligible the second lap was actually quicker. Dave taking line honours, Keith repeating his second place and Phil & Lorna claiming third spot.
Thanks to Richard and Des for running the racing and providing us with a very pleasant evening sailing. 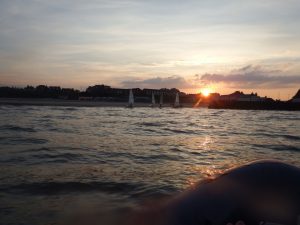