Whilst there were no fireworks or other celebrations going on there was some very close racing… and a lot of Richards !!
For those arriving early at Gorleston conditions looked a little lively with a good Southerly F4 and a choppy sea. However, as often the case in the evening by launch time things had calmed down with the wind now SSW F2-3 and sea state smooth-ish. 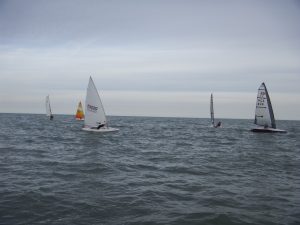 Race one saw Richard Fryer make an early break from fleet in his RS300 crossing the line with a good lead. Behind the rest of the fleet remained bunched the whole race with Phil and Lorna (RS400) ahead of the three singlehanders led by Dan Harvey ( Laser). On corrected time Richard Fryer just beating Dan by 9 seconds. 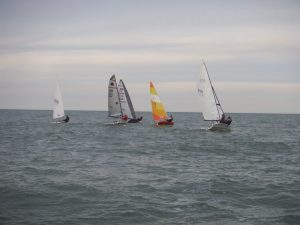 Phil and Lorna timed their start in race two to perfection to take an early lead. However at the windward mark Richard Fryer rounded just ahead. Behind the Dan led the singlehanders with Richard Brown (Solution) and Richard Foster (Laser) a short distance behind. With the wind easing to a F2 and the flood tide kicking in, it made short work of the beats but prolonged the downwind legs required full concentration. The two leading boats extended their lead crossing the line over two minutes ahead. However, this time Dan just beat Richard Fryer by 7 seconds on corrected time.

With the light gradually fading it was decided to hold a final ‘sprint race’ of one lap. No clear winner at the start but Richard Fryer gradually opened up a good lead over the rest of the fleet crossing the line one and a half minutes ahead and winning on corrected time. The three remaining boats enjoyed each others close company for the entire lap with all three crossing the line within a boat length with Richard Brown just ahead of Richard Foster. On corrected time Richard Fryer notched up his second win with Richard Foster second.