There was a fresh and shifty NW’erly for the final outing of the Thursday evening series. Nine boats launches with all but one single-handers. The ’new’ club Phantom (more news about that later) was given its maiden outing in the hands of the Club Commodore.
By the time race one started the wind had shifted a tad to the west making for a port bias start line and hence a busy port end at the start. The flood tide made for a long beat which saw most of the fleet heading for the shore. However, the wind was lighter inshore resulting in little difference between routes. Ed (Spitfire) led after lap one followed by Dave (RS300). Behind, two Lasers were just a few seconds apart with Karl was just ahead of Keith. Offshore was the route to go for lap two with Karl rounding the windward mark first (Ed by this time had decided to the ‘Cat’ for a blast rather than race). In the final downwind leg Dave just managed to take the lead to cross the line first, with Karl just a few seconds behind. On corrected time it was a Laser 1,2,3 with Karl just beating Mark (who on arriving late mistakenly picked up a Radial rig for the club Laser and so was a tad under-powered) by just 6 seconds with Keith in third spot. 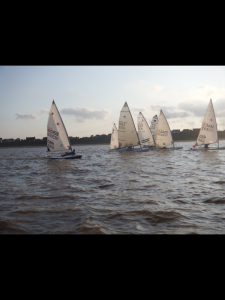 The wind had eased a little for race two and was less shifty. The fleet remained fairly close together for the first lap. Dave opened up a small lead on lap two crossing the line first with Phantom Phil next and Keith just behind. Despite sailing the slowest boat in the fleet Steve kept his Europe in contact with the main pack to the finish, however the lighter wind proved a challenge for Mark in the Radial rig who struggled to keep up and was a few minutes behind. On corrected time it was a convincing win for Keith with Karl riding his luck again beating Steve by just a second for second place.
Many thanks to the race team of Adrian and Ed and to Lorna who ensured supper was ready for us .
There were 20 entries to the series ranging from a Topper to a RS700. Lasers were the predominant class with eight entries. Overall it was a Richard 1,2,3. Richard Brown taking overall honours in his Solution. Richard Fryer second in his RS300 and Richard Foster third in his Laser.
Whilst it was the last of the programmed Thursday Evening sailing, it’s not over yet !!
Next week will be Fun Thursday One – which will see a different course set, we have a few ideas and will be racing whilst daylight permits followed by supper in the club.
The Beeb forecast for next Thursday is looking good so make sure you are there.