The day’s proceedings commenced with the club members forming a large circle on the beach for a minutes silence in memory of Peter Johnson. We were joined by the RNLI Inshore Lifeboat who was stationed a short distance off shore which seemed a fitting tribute to a well-loved and much respected club member.  Following this boats were launched to commence the days sailing. 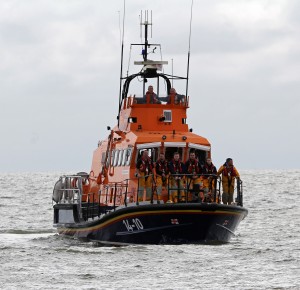 The race team set a large windward leeward course with the F3 -4 from the NNE. For race one the tide was slack so the fleet were spread evenly going up the first beat. Phil in his RS700 and David in his Shadow lead the fleet round the course but close behind were the D-Ones and RS400’s who were having a close battle for position. The Shadow and RS700 managed to open up a two minute gap on the chasing pack but this was not going to be sufficient to save their time.  The following group were closely packed with just 10 seconds separated the first three boats as their crossed the line with the D-One’s of Chris and Ben taken first and second on corrected time and Richard and Carol in their RS400 in third.

By the time race two started the tide had started to flood so many boats stayed inshore up the first beat. Those who ventured just 100 metres or so further out benefited from a good lift which saw the fleet well-spaced as they rounded the windward mark. The RS400’s of Richard/Robyn and Richard/Carol were first to round the mark and had a small led on the rest of the fleet. Nick in his Phantom and Jamie in his Aero were close behind.  At the finish Richard/Carol had managed to slip past to take line honours and Richard/Robyn holding onto second place. Nick managed to save his time against Jamie with D-One Chris on a late charge to pip Jamie in corrected time.

The race team adjusted the line a tad for race three which added some port bias. Richard/Carol braved a port hand flying and thanks for some courteous sailing from Jamie crossed the fleet at the start. With the tide now stronger and the wind a tad lighter, most kept inshore with exception of William/Jack in their Fireball. Having got off to  a poor start they headed offshore and from the committee boat looked as if they were about to go further behind but picked up a good breeze and rounded the windward mark close to the leading pack. David (Shadow) and Phil(RS700) led the fleet round the course but the ever persistent team of Richard/Carol were never far behind and took the race win. Chris again won the battle of the D-One’s taking second with Richard and Robyn continuing their good form to finish third.

All in all a very pleasant day’s sailing with moments of sunshine and a good breeze throughout the day.