A fresh breeze greeted everyone as they arrived on the beach for the second weekend of the Watling Plate series. 11 boats launched in what was to be an exciting days racing. With the wind in a South Easterly direction the start line was set off the beach in pleasant sailing conditions. Apparently this was not however the case at the windward mark! After a clean start there was a tight battle between Richard Fryer and Carol Smalls in the RS400 and the 2 lead D-ONES helmed by Chris Sallis and Martyn Browne throughout the race. Both D-ONEs dropped their spinnaker early on one of the down wind legs allowing Richard Fryer to take the win by 6 seconds. Followed by the D-ONEs. 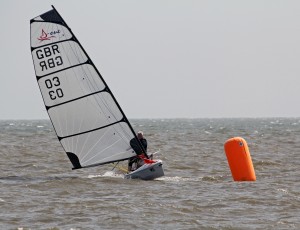 There were a few capsizes at the windward mark and several wobbly gybes in what was described as ‘very wavy out there’ by several sailors, which led to less takers for the next race. Nick Favell led the fleet round the first two marks of the triangular course before being overhauled by the lead asymmetrics. 2 laps later as the finishing boats were approaching the finish line it was all down to the last 30 seconds. Martyn somehow managed to survive a massively wobbly gybe and make the line with inches to spare on the committee boat to take the win, with Richard Fryer taking 2nd place and Chris Sallis taking 3rd, Nick Favell took his second 4th of the day.   With the wind and waves building the fleet went in for pie!

A big thank you to Josh and John who performed excellently assisting the fleet.