Congratulations to Tom and Sarah for their victory in the End of Season mini series.  With some of the strongest tides of the season and only a light breeze tactics played a great part in both days racing. With Tom and Sarah taking a victory in week one of over 35 minutes as the rest of the fleet tried to beat through the tide to round the first mark time and time again.   Race 2 &  3 saw a strengthening of the wind and lap times back to 20 minutes Martin taking bullets in both races but the 505 still taking a 2nd and 3rd.  Week 2 and still not much breeze and the tide as furious as the previous week,   Just before the race start the course was shortened to try and accommodate the tide,   a good job too as it was still a struggle. Chris took an easy Win in the first race and it looked like the wind was picking up for race 2.  Looks can be deceiving and Phil and Lorna headed for home before the end on the first beat,  the rest battled on with race team eventually deciding to finish after 1 lap a decision universally approved.  Tom managed to sneak past Chris to take the honours as the rest of the fleet limped across the line.  After lunch the ramp was soon lifted thanks to all. 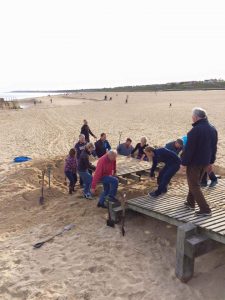 So hopefully see you all Saturday for the final clear up.

There are no upcoming events.